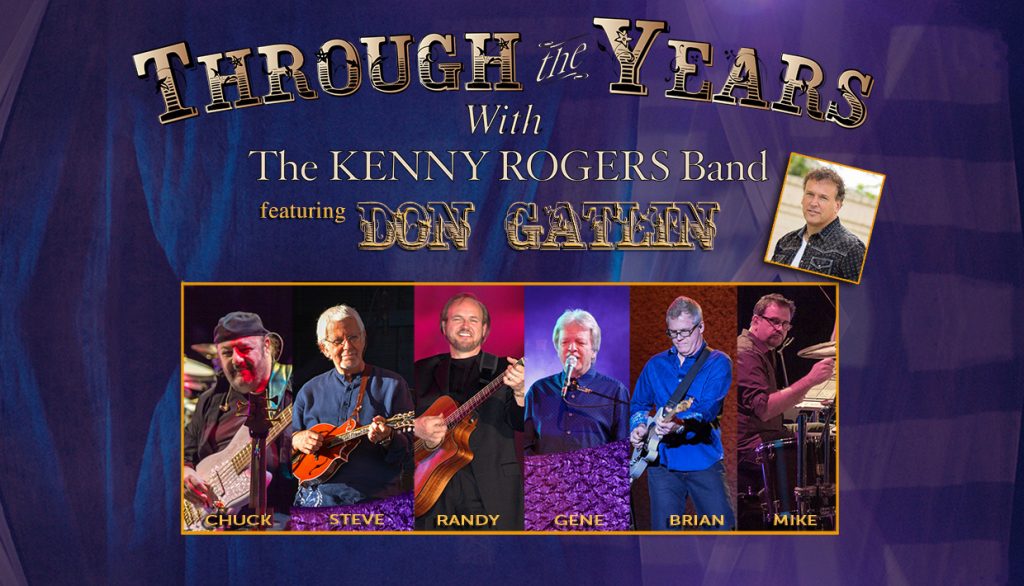 Through The Years with The Kenny Rogers Band F/Don Gatlin Show/Concert (full band). Performing the songs of Kenny Rogers. No one knows the music of the legendary Kenny Rogers better than the musicians who backed him for more than 40 years. They knew that audiences still wanted to hear all the songs that the singer made famous. To honor Rogers and his music, they have put together the show, Through the Years, as a way of paying tribute to a singular artist and keeping his sound and his songs alive for a new generation. They’re not just sharing the music they played with him for so long, but first-hand stories of being on the road with “The Gambler.” They also share the unique perspective they have on Rogers and the songs because they knew him and the music best. The band presents the songs the way they and Kenny Rogers performed them as they traveled from Carnegie Hall to the Royal Albert Hall and from the Sydney Opera House to the Grand Ole Opry. They’ll play all of the mega-hits you’d expect, like “Lady” and “Lucille” and some favorites that didn’t always make it into the usual tour song list. That makes the show a special retrospective of an amazing career.

Singer/songwriter Don Gatlin, who is featured in the show, knows a lot about Kenny Rogers, too. He had his dream of having one of his songs recorded by a superstar when Kenny Rogers recorded “I Won’t Forget.” Kenny was also a fan of Don’s voice and he asked Don and his band, Savannah Jack, to join him on the road. This led to 66 performances opening for Rogers.